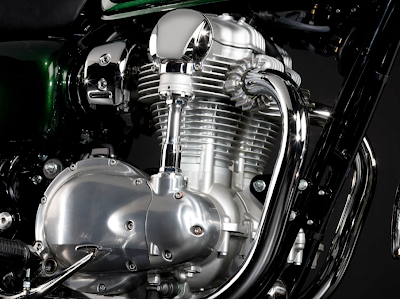 had the w800 on test saturday morning - well having owned a sporty and a bonneville in the past i think im in a pretty good position to compare and contrast
ill start off dispelling the bull of it being a copy of the bonneville - it isnt. the w650 was launched 2 years before the bonneville even hit the forecourts. the w800 to all intents and purposes is a bored out 650 with a few tweaks. it would have been nice if they kept the kick start on it though
first impressions - walking up to the bike its small - no smaller than the bonnie but it looks dwarfed by all the massive cruisers and sports bikes in the showroom. but it shines like a jewel in a belly dancers navel. the fit and finish looks excellent quality.
one big bonus over the bonnie to me is its actually made of metal - who'd a thought - a bike with metal parts in 2011... ok so its probably a bit heavier, it might rust a little if scratched, but it just seems more like a real motorbike than a toy
after my "briefing" on the controls (they are very minimal) i started it up - man its quiet.
jumped on and the seat feels a little strange - slightly tilted forwards, but i got used to it in a few minutes, when i hit the motorway for a little while that tilt actually makes for comfier cruising when you get up to say 70mph [cough] - its got PLENTY of go when you twist the throttle on the motorway
the motor feels to have more bottom end than the bonnie ever did but not the torque that a sporty has, i find it comfier position at speed than the sporty, similar to the boneville but after 45 minutes the bonneville seat wasnt too comfy for me.
it was a rainy day [i know.. in england - crazy eh..] so the roads were a bit greasy so i didnt nail it around TOO hard but its a pretty confidence inspiring bike - goes where you point it and stops well - the single disk up front and drum out back are more than enough for this relatively lightweight bike - kawasaki have got some stick for releasing a modern bike with a drum rear - well - its a bloody retro, if you modernise everything then its not any more is it?! the drum locks the rear without too much stamping - a disk would do no more
its refreshing to see a new machine that actually looks like a motorcycle rather than a space ship
the down-side to the kawa.. options from kawasaki and the aftermarket, or lack there of... a choice of paint would be nice - im not talking a million variation but maybe just 2 to pick from would be nice of them (1 being black). the factory doesnt even make a rack for it. the kawasaki book list a whopping 3 things you can buy as extras.
thats not a great worry to me but a rack that would fit straight from the box would have been nice.
anyhows, the vertict - vintagechop star rating.... drum roll...
4 out of 5
the softail is going and im getting one - did some haggling and put down a deposit - collecting this weekend - im just sick of not being able to park the softail in a london parking bay coz its too long / so wide and some van driver will drive over the front end of it.. the kwak will hussle through traffic a heap easier too for me - anyone want to buy a softail haha
Newer Post Older Post Home