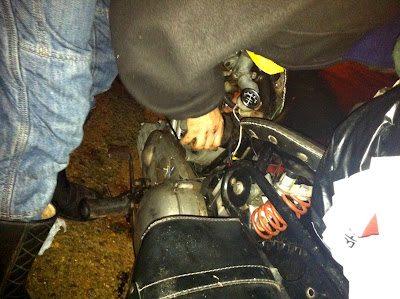 well - it was fun again. fairly warmish until sundays cold wet ride home that became an endurance ride.
shaun got up to my place late afternoon after we planned an early morning off on friday - he was on the back of an AA van - bugger... we spent the rest of the day trying to get him going, but his mag was dead and we ran out of time / light and energy... but i had a pan-euro sat in the garage waiting to sell so lent him that and we set off early saturday instead. with shaun on the pan i took the sporty [and even a full face helmet!! - glad of that on sunday i was] and we hammered miles and got up there in sensible time.
saw everyone i wanted to see, drank a few beers and had some laughs - it was wet, windy, very boggy but fun times.
shaun took pics - i forgot my camera - when i get them ill post them up
Newer Post Older Post Home