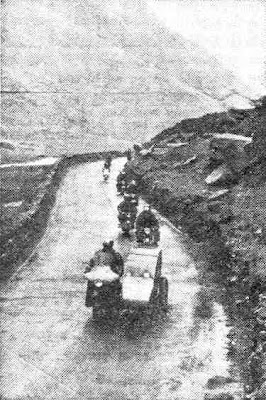 The following white panel is a facsimile of a press cutting taken from the 'Radio Times' in the middle 1960s... Wheelbase was a motoring program shown on BBC 2.

Wheelbase covers the Dragon Rally
IF you drove along the upper reaches of A5 last Saturday you must have spotted an endless procession of determined-look-ing motor cyclists, heading purposefully into the North Wales mountains. Nothing but a travel-stained bike and a bedroll lashed to the luggage grid marked them out as a fraternity, yet each had a smile and cheery thumbs-up sign for his fellow. Who were they? Where were they going?

That weekend was the time of the Dragon Rally at Llanberis, the biggest motor cycle rally in this country.

Over 4,000 riders, many of them teenage boys, from the Continent as well as the farthest corners of the British Isles, braved the midwinter. Some of them made round trips of 1,000 miles and more, through sub-freezing weather and over ice-bound roads. At journey's end, beneath the shadow of Snowdon, they slept rough in tents and ramshackle huts on the bleak mountainside.

Yet no lavish prizes, no entertainments lured them there. The only qualification asked was enthusiasm enough to ride a motor cycle into the heart of the North Wales mountains in Winter's foulest weather.

What is the secret of the Dragon Rally? Why should it capture the imagination of young riders everywhere?

A Wheelbase team followed a party of teenage motor cyclists from their homes in Liverpool to Llanberis, and tonight you can see the adventures that befell these teenagers on the expedition. You'll meet the friends they discovered along the A5 highway, and hear the experiences of the British, French, German, and Belgian enthusiasts who joined together beneath the red dragon flag.
CHRISTOPHER JOHN